The high dynamic range defeated the software which placed green areas of pixels in the areas that were just short of clipping to full white.

Reviewing this Macphun software provided the opportunity to consider and test other aspects of HDR imaging. An HDR (High Dynamic Range) is a compilation of several different exposures of the same scene to overcome inherent limitations in the dynamic range of the camera system. Typically this may be thought of as a dark church interior in which the windows are illuminated by strong daylight. A single exposure may be made for the interior or for the windows but cannot encompass both. In addition to overcoming this issue the HDR images of the past decade have also provided a certain 'look' to an image, often typified by exaggerated clouds in the sky or an almost metallic look to portraiture. This look is not universally popular and is starting to look a little dated. It has, from the start, been overused in some quarters, to the dismay of competition judges!

The desire to make HDR images has spawned a software trade in bespoke applications to make HDR images for although the compositing of images may be accomplished in Photoshop, it requires a good level of masking and mask-manipulation skills. Generally the HDR software will provide pre-sets to achieve a particular look for an image, often including an option to add glow and/or desaturate an image.

The Bracket Set
All HDR techniques require a number of exposures at different settings to bracket around the notionally correct exposure. The job can be accomplished with two, three or five images, sometimes more. The most common is probably a three-shot bracket at ±2 stops. In a perfect world the set should be made from a tripod although a high-speed, autobracketed set of images can be made with correct camera settings. For example the Nikon DSLRs have a dedicated bracket button which, when depressed, allows the user to choose both the number of frames and the exposure intervals between frames by use of the front (sub) and rear (main) command dials. Additionally the sequence may be altered in the LCD menu on the back. The Canon system is driven from the LCD menu and a tad more fiddly. When choosing the method of changing the exposure it is usually preferable to set the camera to Aperture Priority mode so that depth of field does not vary and if the subject might move (eg swaying trees) locking the focus is a good idea. Note that some cameras provide in-built HDR settings and image manipulation which is not the subject of this article (you can't shoot Raw files this way and have a lot less control).

The greens were presented as rather garish. This is not a problem after a monochrome conversion as shown opposite top. Note also the preset options displayed as a bar along the bottom of the frame and the array of adjustments available in this second dialogue panel.

Macphun Aurora Pro
When using this Mac-only software you open the application, load the requisite images and press the button to make an HDR, it really is that simple. There are options to Align Images, Ghost Reduction and Chromatic Aberration Reduction at the outset and, once the compilation process is complete, a mass of other adjustments and presets appear. And we mean a mass, there are loads of them! If that all gets to be too much, you can go for a preset from the scrolling window at the base of the interface although some of them (most to some eyes!) are a bit kooky. There are 'natural' settings available for the less adventurous.

The image set that we tried was challenging, rather too challenging in fact, and the software struggled to provide a clean rendering of the colours, inserting heavy green fringes around the sunbeams. Using the 'Landscape' presets produced a riotous green for the foliage on most settings. The bushes waving in the breeze made ghost removal a task too far. This particular landscape was better suited to a manual approach using Photoshop as described later.

The software did create a reasonably attractive Dramatic Monochrome although there was still some clipping and posterisation in the cloud fringes. Rendering of three D810 Raw files took 1m 03s.


There are 0 days to get ready for The Societies of Photographers Convention and Trade Show at The Novotel London West, Hammersmith ...
which starts on Wednesday 22nd January 2020 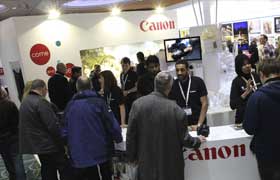